The Good, The Bad And The Ugly Of Insurance Sales

A few months back I ran into a great lady who had purchased a life insurance policy from me many years ago. We had stayed in touch for a few years but I lost touch with her. Needless to say I was a bit surprised when she responded to one of my posts on Facebook regarding some new policies Surf Financial Brokers was offering.

After speaking to her for a while I realized that a lot of things in her life had changed since we had last spoken. She had made several career changes and was currently working for a non-profit organization. Her personal situation had changed as well, as she had a new beau who seemed to be a good guy. During our conversation she mentioned that the life insurance policy she had purchased from me years ago had lapsed and now she was in the market for a new policy.

Her concerns had also changed a bit over the years. Her parents were now deceased, but before they died she had been one of the principle caregivers in their later years. With that experience she had come to realize how expensive care in a facility was. Now she was in the market for some sort of life insurance, but she also wanted something to help offset the costs of long term care. The problem was that she had a limited budget to do all of the things she wanted to accomplish.

One of her main concerns at the time was that Covid was sweeping through nursing homes and assisted living facilities. With this in mind, she really wanted to know that if she needed care, she could stay in her own home. Luckily we had a great way of handling this part of the issue in a way that would be affordable for her. 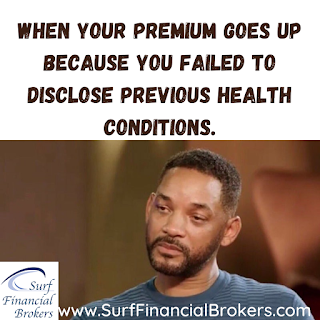 Our Short Term Home Healthcare plan (STHHC) offers clients a way to offset the extremely high costs of having caregivers in the home. The policy helps with costs for up to 365 days, which do not all have to be consecutively, since many people have caregivers come to their homes only 3 or 4 times a week, usually when family is unavailable. This means that the policy can conceivably be stretched out over several years.

Even better, the application only has 3 questions, which means getting approved is very easy.

But the best part for her was that the policy is very affordable compared to a full-blown Long Term Care (LTC) policy. Saving her money was a priority for her, but this was only one part of the issue.

We still needed to resolve the life insurance part of the puzzle. This is where things got messy. She had gotten older (by about 15 years) since she had purchased the previous policy from me, so that made the rates go up of course. Even though the face amount of the policy she wanted was fairly low, we both agreed that a permanent policy would be a better fit than a term policy.

I took her application and submitted it to the insurance carrier, and soon after a paramed nurse met the client at her home. Everything was going smoothly until I got a call from the insurance company. Apparently when the underwriter pulled her medical records there were some underlying health issues that had not been disclosed previously.

The insurance carrier rated up the policy, meaning that her premium cost would go up. They gave me a new price, as well as different face amount for the premium she wanted. I knew in my gut that the client was not going to be pleased either way, but I picked up the phone and gave her a call.

When I gave her the new numbers she said she needed a few days to think it over. The following week I called her and left a voice message, followed up with a few more over the next week or so, along with emails. I got no response. This wasn't good.

After several weeks I got a letter in the mail from the insurance carrier. She had called in and requested that the company withdraw her application. Since she decided that she did not want to communicate this information through me I left her alone. I don't want to badger the lady and honestly I think she prefers I drop the matter.

The moral of this story is that if she had been upfront with me on her health issues, we could have gotten her a more accurate quote from the beginning of the process. Remember that life insurance quotes are merely estimates based on the information given. A final rate is not determined until the full underwriting process is completed. It may be uncomfortable, even embarrassing, to discuss these kinds of personal matters with your agent, but full disclosure is always the best option.

Chris Castanes is the president of Surf Financial Brokers, helping people find affordable life, disability, long term care, cancer, accident and other insurance coverages in North Carolina, South Carolina, Virginia, Tennessee and Georgia. He's also is a professional speaker helping sales people be more productive and efficient and has spoken to professional and civic organizations throughout the Southeast. And please subscribe to this blog!

Posted by Chris Castanes at 9:34 AM