When Your Life Insurance Won't Pay

Life insurance, as well as disability insurance and any other type of insurance is a promise. It's a promise made on behalf of the insurance company to pay you for a loss, whether you lost your life, your ability to work or anything else stated in the policy. But more than just a promise, which can be broken, your life insurance policy is a contract. Legal and binding, it has plenty of legal jargon involved, which you, as a policy holder, should be fully aware of.

When you look at a brochure for an insurance policy there is usually a section in the back that describes "limitation and exclusions", or something to that effect. This list can be long or short, but either way you should take a few minutes to understand what is covered and what won't be covered if you suffer a loss.

A good agent will be happy to discuss this with you beforehand. At first glance, most of the items are common sense, but some can be confusing. And some will be altered or "re-interpreted" if need be.

For example, almost every life or accident insurance policy I have seen has an exclusion for loss as a result of terrorism. This was widely seen and described by agents in the following scenario: You go to the Middle East and a bomb goes off. If you die, the company isn't paying.

However, shortly after 9/11, with thousands dying as a result of a terrorist act, life insurance waived this exclusion. Their explanation was that the exclusion was for "foreign" acts of terrorism, in another country, even though that was not stated in the contract at all. Personally, I think they made the exception because they knew it would be a public relations nightmare if they enforced the terrorism exclusion when emotions were already incredibly high. 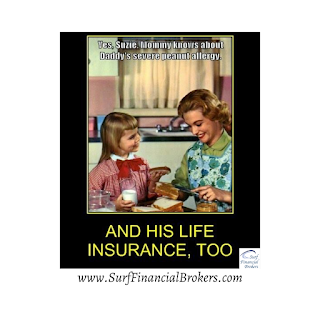 If you take a look at the list of exclusions, some make sense. For example:

One of the other reasons why a policy won't pay is if you are not truthful on the application. The insurance company's underwriting department will try to find out as much about your medical history and lifestyle as possible during the application process, but they can't look under every stone. If you have misrepresented yourself (nice way of saying you lied) on the application, the insurance carrier may not pay the death benefit.
The best advice is to be honest with your agent and the underwriter (they may conduct a phone interview) when they ask about your medical history, alcohol and drug use, travel plans and risky activities.
By spending a few minutes looking over your policy you can save you and your family a lot of confusion and heartbreak. If you have questions about any of this, feel free to look us up on the web and drop us a note. In the meantime, stay healthy!
Chris Castanes is the president of Surf Financial Brokers, helping people find affordable life and disability insurance coverage. He's also is a professional speaker helping sales people be more productive and efficient and has spoken to professional and civic organizations throughout the Southeast. And please subscribe to this blog!
Posted by Chris Castanes at 6:30 AM