Does The Non-Breadwinner In The Family Need Life Insurance?

Recently I was reading an article on all of the reasons people fail to buy life, disability and other types of insurance. Apparently there are a lot of misconceptions floating about and I wanted to take the opportunity to hopefully correct these ideas. Taking them one at at time I hope to explain these misconceptions over the next few posts. 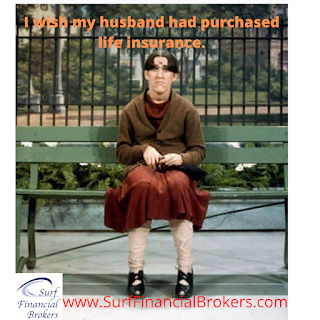 Last week I was talking with a couple who were doing okay financially. They realized that they were fortunate enough that one of them could stay home with their small kids while the other was the main breadwinner. In this situation, the wife worked and the husband stayed home and had a small consulting business, which by their estimation was "more of a hobby". I took that as meaning he didn't bring a lot of money into the household.

We discussed life insurance for the wife and ran the numbers to pay off the debt and replace her income for a few years. They both agreed that she needed to be covered. When I asked about the husband, there was a bit of confusion. "He really isn't contributing to the bills, so I don't think he needs a policy," the wife said.

The husband, who I thought would pipe up and say something, sat there nodding in agreement. I asked a couple of simple questions: If he were to die unexpectedly, how much would she need to pay for childcare? Or would she want to take time off from work to stay home with the kids?

This was obviously something neither had considered. Especially when neither of them had family nearby. The kids were young and only one was enrolled in school, so the other child would need to either be enrolled in a daycare or preschool, or they would need to have someone come into the home, like a nanny.

When I explained what that kind of care costs, they were taken aback a little. I tried to ease their concern and let them know that a term life insurance would be much less expensive and, in the event of the husband's death, could cover the expenses for childcare plus his funeral costs, which they also failed to plan for.

When a family member is not the breadwinner, it doesn't mean that they don't need life insurance. As a matter of fact, we even offer a disability policy on stay-at-home parents to help replace the costs of daycare.

What are your thoughts? Leave us a comment below.

Chris Castanes is the president of Surf Financial Brokers, helping people find affordable life, disability, long term care, cancer, accident and other insurance coverages in North Carolina, South Carolina, Virginia, Tennessee and Georgia. He's also is a professional speaker helping sales people be more productive and efficient, and has spoken to professional and civic organizations throughout the Southeast. And please subscribe to this blog!

Posted by Chris Castanes at 3:29 PM