Why I Got (Back) Into To The Insurance Business

A few weeks back I joined an online chat with some people I really didn't know but who had some valuable information to offer. Fortunately, these very nice people welcomed me to their group. One of them in particular, Adam Griggs who is the CEO of CLARAfi, dropped me a note a few days later, which began a conversation.

Adam took a look at some of my videos on YouTube, gave me a word of encouragement, and then suggested that I make a short video explaining my "how and why" I got into the insurance business. To be honest, I initially was thinking, "Yeah, no one really wants to hear that story." But since Adam took the time to watch a few videos, I thought the least I could do would be to consider his idea.

I thought back to my first venture into insurance back in 1985. Having graduated from college with no real job prospects, my father wanted me to work with him at his fledgling engineering firm. Keeping my eyes open for other opportunities, I begrudgingly went to work for him entering data into an MS-DOS program.

There were several issues with this situation, with a major problem being that I was not an engineer. My degree was in Business Management. Also, my old man, who was a micromanager to say the least, wanted me to live at home, work with him, and let him decide what I should eat for dinner. Also, that dinner would include discussions about work, which I had just suffered through a few hours earlier. I was quickly going crazy.

I needed to find a job where I could learn some real world business skills while getting out from under the old man's thumb. One morning I told my father I had a job interview in Raleigh, NC, about an hour away. I didn't really, but my plan was to go there and start looking for work. In the course of a few hours I had managed to find what I thought was a good opportunity with an insurance company. 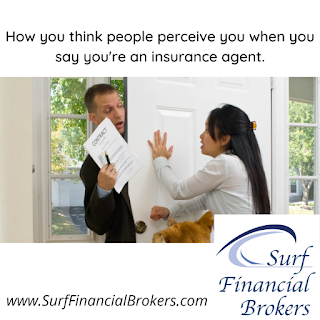 The job wasn't exactly as presented by the recruiter, who had made it sound fairly easy work with banker's hours and great pay. Instead I found myself driving all hours of the day and night in rural areas doing what boiled down to door-to-door insurance sales. And the product was not something I would not purchase for myself. As a matter of fact, I met several people who were angry about their claims experiences. One even threatened to get his gun and shoot me.

After a few months of this, I realized that my coworkers were leaving and being replaced by a revolving door of new agents. It didn't take me long to jump ship as well, and being young and naïve, I got out of the insurance business altogether for about 15 years.

In 2000, I decided to give insurance another go, but this time would be different. I wanted to learn the business from multiple perspectives, so I worked for various companies as an independent agent. Each company had its own way of doing things, from how they prospected for clients to the ways they collected premiums. I learned how some insurance carriers' products were better than others and when those products were suitable for clients.

About this same time, I had an aunt who had been in a nursing home for over 20 years. She had fallen and broken her hip when I was still in high school. My parents had been left with the responsibility of taking care of her bills and I watched them struggle. Even though my father's engineering firm was doing okay, his finances were stretched. A long term care policy would have been a great help, had one been available for her (and subsequently my parents) when she had gone into a facility.

That's when I realized that selling insurance was more than just a job, but a way to help people who were in bad situations by convincing them to mitigate their financial risks ahead of time. There were plenty of examples of insurance policies keeping people from financial ruin, from strangers to those close to me.

For example, my wife's father had died unexpectedly before I had met her, and his life insurance policy helped her graduate from college and take care of other necessities. We even used some of the proceeds years later to make a down payment on our home.

Making sure that people have the right amount of insurance, their beneficiaries are up-to-date and keeping it all in a budget can be tough. Insurance is a product that most people don't want to buy, so the job is more about convincing them they need it. Because of this, the stereotypical insurance salesperson is high pressure. I prefer to say I use "good pressure", because my intention isn't to get the sale, but to make sure that when something bad happens, my clients won't have to move out of their homes or take a second job to pay the bills.

When someone goes to my website and books a phone appointment to discuss life, disability or long term care insurance with me, I may give them a bit of a nudge to make sure their needs are met. It's all done with their best interests in mind. And that is why I do what I do.

Chris Castanes is the president of Surf Financial Brokers, helping people find affordable life, disability, long term care, cancer, accident and other insurance coverages in North Carolina, South Carolina, Virginia, Tennessee and Georgia. He's also is a professional speaker helping sales people be more productive and efficient, and has spoken to professional and civic organizations throughout the Southeast. And please subscribe to this blog!

Posted by Chris Castanes at 4:58 PM