A few weeks ago I was with a client who needed some extra life insurance. Actually, she needed quite a bit more, and we found a very suitable policy that fit right into her budget. She was happy with it and decided to proceed with the application. I began asking all the questions and everything was going well until we came to the question about replacements. Why was the insurance company so interested in her current coverage and whether or not she was going to replace it with the new policy?

You see, when you apply for a life insurance policy, the company wants to know if you already have coverage, and if so, which company is it with and are you going to keep it and just get additional coverage, or will you be replacing it all with the new policy? The insurance company isn't being nosy, but actually they are looking out for your best interest.

The reason for this is that life insurance typically pays a large commission to the agent, around 70-80% for the first year, depending on the policy. After that first year, the agent's commission drops dramatically to around 5%. With this in mind, an unethical agent may try to replace your current policy to sell you something that will pay another large first-year commission. 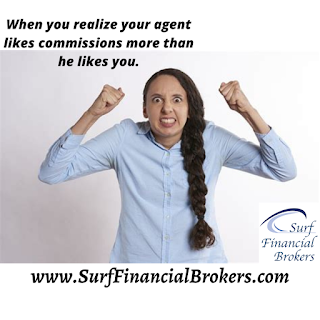 This practice is known as "churning" as in "churning up fresh commissions" and is frowned upon by the industry, and in some states is illegal.

The issue is that the replacement may not be in the best interest of the client. Replacing the policy with another may result in higher premiums, but that unscrupulous agent doesn't care. But the insurance carrier does, which is why they have added additional forms to the application packet asking all of those questions about your current policies. In essence, the insurance company wants to make sure that the agent is doing the right thing by you.

It's not just life insurance where this occurs either. Several years ago I was introduced to a very nice lady who had an issue with an annuity. She started out with about $250,000 that she had put into an annuity. The agent would call her every couple of years and tell her that he had something better, and would move her money to another annuity. Each time he did this he made a nice fat commission.

But something else was happening as well. The move would cost her thousands in surrender charges and early withdrawal penalties. She showed me a folder with all of the paperwork and the agent must have moved her money at least three times.

We called the current company where her money was housed and I asked what amount of money was there. She was down to about $85,000 and if I were to move it she was going to lose an additional $10,000. I recommended that she stay put and to stop answering calls from that other agent.

When I let her know what that the agent's commission was (My estimate was around 7% each time he moved her money) she said, "Every time he talked me into changing companies I probably bought him a new car." She was right.

As you can see, those crazy questions are on the application because the company is looking out for you best interest. If you have any other insurance questions you would like answered, leave us a note in the comments section. And in the meantime, please stay healthy!

Chris Castanes is the president of Surf Financial Brokers, helping people find affordable life, disability, long term care, cancer, accident and other insurance coverages in North Carolina, South Carolina, Virginia, Tennessee and Georgia. He's also is a professional speaker helping sales people be more productive and efficient and has spoken to professional and civic organizations throughout the Southeast. And please subscribe to this blog!

Posted by Chris Castanes at 6:00 AM