In the previous post I went over a few facets of what makes selling insurance, life insurance in particular, a difficult job. There is a hesitancy from people to purchase something they know they need, but generally speaking, do not want to purchase. In essence, asking someone to add to their monthly bills to protect their family from financial ruin is a hard job.

One of the many objections agents get when selling life insurance goes something like this. "I want to talk to the wife (or my husband, partner, significant other) before making a decision. I may need a few weeks." Where do I begin?

First, I have rarely met a spouse who did not want to be named a beneficiary on a life insurance policy. And by "rarely", I mean never. As a smart agent once proclaimed, "Wives hate life insurance but widows love it." 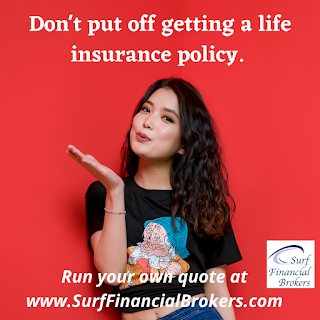 A few years ago I met a woman who was in dire financial straits. Her husband had left his well paying job to start his own business. In doing so, he borrowed some money to get his business off the ground. The wife was fully aware of the situation and insisted he purchase a life insurance policy to cover the debts he had incurred if he were to die unexpectedly. He told he would "get around to it."

After a few months went by, he told his wife that he had bought a policy. She never saw the paperwork or a policy but assumed that he was telling the truth. Not long after, the husband was clearing out some trees near their home when a log fell on him, crushing him to death.

You can figure the rest out. There was no policy. She couldn't afford to repay the debt and lost her home. She was forced to take a small apartment and, even though she had been out of the job market for a long time, had to take a job as a teacher's aide in a high school. When I spoke with her she broke down in tears several times from the stress that could have been avoided if her husband had just purchased that policy.

When someone says they'll get around to it later, I share that story with them. And I make sure that their spouse or significant other is present to hear it as well.

Imagine someone dropping $50 each month on coffee but not wanting to spend $35 to protect their family. As stated previously, the priorities are all out of whack.

So when the prospect claims they need a few weeks, I let them know that the insurance company will also need a few weeks to decide if they will approve them and what the rate will be. I will encourage them to start an application which can be submitted with no money. "That way the underwriting process can begin and a paramed exam can be completed in the meantime. And by the way, we pay for the exam as well, so you won't have to pay anything until the insurance company has done their due diligence. And that process could take a few weeks," I say. "So while you're thinking it over, so is the company."

People think of insurance agents as being high pressure sometimes. Personally, I feel that the vast majority of agents are trying to do the best thing for their clients and sometimes that requires "good pressure". And in the end, the beneficiaries of that policy are thankful for the agent's work.

Chris Castanes is the president of Surf Financial Brokers, helping people find affordable life and disability insurance coverage. He's also is a professional speaker helping sales people be more productive and efficient and has spoken to professional and civic organizations throughout the Southeast. And please subscribe to this blog!

Posted by Chris Castanes at 9:25 AM