A few years ago I met a young woman who was married and had two young boys with a third child on the way. She was a server at a local restaurant and I was there at the request of the owner to talk to the staff about various insurance products. The server, who I will call Sue, asked me about life insurance coverage on her husband. She was very concerned because she felt her husband worked a dangerous profession and she did not want to be left with three kids to take care of on her own if something were to happen to him.

I asked Sue some basic questions like her husband's age and general health condition. "He's healthy as a horse, but stubborn as a mule, especially when it comes to life insurance," she said. "He wants to get a policy through his work, but I know we can get it cheaper elsewhere."

She was right. Sue had done her homework and figured they needed at least $250,000 in life insurance coverage for her husband. At his age, the policy he wanted to get through the "worksite" insurance company was going to cost around $70 each month. When I ran a quote for her the same policy was less than $40 each month.

I sat down with the two of them a few days later and presented my illustration. She knew it was a good deal and appreciated the savings I was offering. He, on the other hand, argued vehemently against it. At first I couldn't understand what his objection was. Sue was getting visibly upset with him while he acted as if I was taking advantage of him.

After a painful hour of this I asked him what would make he want to pay close to double for the same policy. He said, "I don't want to have to worry about having that $40 in my bank account each month. I'd rather they just took it out of my paycheck!" Sue, furious at him at this point, looked at her husband incredulously.

"So this is about convenience?" I asked.

"Yes," he said meekly. I had heard this argument before, but Sue didn't understand it. Needless to say, I didn't get the application. The tension was palpable as I packed up my papers. Sue apologized for her husband's behavior. 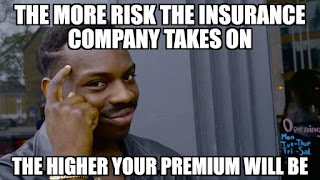 People are funny sometimes. They are willing to pay extra, and in this case nearly double, for the weirdest things. I had heard the "convenience" argument many times before, so it wasn't new to me. "If they just take it out of my pay I don't have to worry about it," has been the refrain of many people.

So why was the price of that "convenient" policy so much higher than the one I offered? In a nutshell, it had nothing to do with convenience but everything to do with underwriting.

You see, I spent a year selling working with the same company that was offering his payroll deducted coverage. The policy Sue's husband was wanting was "simplified issue", which means that the application just had a few health questions. No medical exam, no blood or urine specimen and probably no request for medical records. That puts a lot of risk on the insurance company, and that risk gets passed along to the consumer in the form of higher premiums.

On the other hand, if an insurance company requires a paramed exam, along with requesting medical records from the applicant's physician, that carrier's risk will drop dramatically. And with that decreased risk comes decreased premiums.

This made sense to me years later when I worked for another insurance company and our manager called a 10-year term policy a "sucker bet". He explained it like this. "A fully underwritten life insurance policy will require an exam and medical records. If nothing shows up from there, the odds of the person dying in the first five years of the policy are extremely low. Basically, the company is collecting premium for 10 years when they are only insuring the last five years of the policy."

Underwriting can find potential risks and problems, thus weeding out those potential early claims. For example, I had a guy apply for a policy who was declined because his liver enzymes were very high. The client was surprised to hear this and I recommended he go to a doctor. Sure enough, he found out he needed a transplant, but it was too late. He passed away a few months later.

As for Sue and her husband, they split up not long after I met with them. She told me he was too hard headed for her and has since remarried. She and her new husband have plenty of life insurance and she has peace of mind.

Posted by Chris Castanes at 7:30 AM