When I speak to groups about long term care I usually start off by asking the audience to raise their hand if they know of someone who is either receiving care or has received long term care. Of course, every hand goes up. Each participant has a story about a parent, grandparent or other family member who has been in a facility or had home care at some time.

Since it's Long Term Care Awareness Month I thought I would share a personal story. In 1979 my aunt, who was already having mobility issues, fell down and broke her hip. My mother's oldest sister by 20 years, my aunt was moved to a nursing facility. Her adult children were in no position to pay for a nursing home, so it fell on my parents to help out. 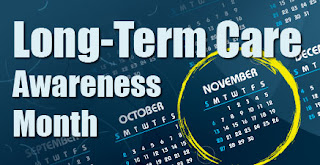 My aunt had inherited a rental property when my grandmother had died a few years earlier, but the rent was not enough to cover her bills. At the time, long term care insurance had not been developed yet, so the cost of her care would have to come out of someone's pockets.

After some thought and negotiations, her rental property was put in a trust, with my father as the trustee and the beneficiary. Any shortages would be the responsibility of my parents, who were in their 50's at the time. Statistically, people who have broken a hip usually survive on average around 3-5 years. If and when my aunt would pass away, my parents would inherit her rental property.

Years came and went. The five year mark, then the ten year mark. My father renegotiated the leases as they expired to keep up with the cost of his sister-in-law's care. More years went by, and my aunt continued on in her nursing home. And as this wore on, my parents continued to age as well. Money was tight as my parents try to keep themselves and my aunt afloat.

I was in high school when my aunt was put in the nursing home. While she was there I went to college, graduated, moved away, got married and had a child. When she passed away in 2001, my aunt had been in the nursing home for 22 years. My parents, who were now in their 70's, were financially and emotionally drained. At the time of her death, my mother and father were paying over $5000 per month out of their pockets for her care.

After her funeral, my aunt's adult children asked about their inheritance. Apparently no one, including their mother, had bothered to mention the arrangement with the trust fund. Upset with the situation, they never spoke to my parents again.

As I was restarting my career in insurance, I tried to speak to my parents about their care. At the time, they were still eligible to purchase coverage, but being children of the depression, they deflected my pleas to look into it.

"Don't put us (my sister and I) in the same position you were in all of those years," I begged to no avail. I lived about two hours away from my parents and my sister was about seven hours away. "What are we going to do if something happens to mom?" I asked my father.

"I'll take care of her," he said. Sadly, his words were prophetic.

Posted by Chris Castanes at 9:23 AM